The Niger Delta region of Nigeria is located in the “South South Zone” and covers an area about twice the size of The Netherlands, and is made-up by 6 of the 36 Nigerian states, which includes Akwa Ibom State, Bayelsa State, Cross River State, Delta State, Edo State and Rivers State.

The area has a population of about 23 million people and houses more than 40 ethnic groups (including: the Bini, Efik, Esan, Ibibio, Igbo, Annang, Oron, Ijaw, Itsekiri, Yoruba, Isoko, Urhobo, Ukwuani, Anioma, and Kalabari), and with a youth population (under the age of twenty-five) of 19.4 million (or 62.3 percent) the Niger Delta region has one the world’s youngest communities. 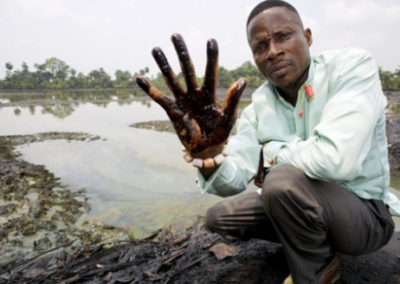 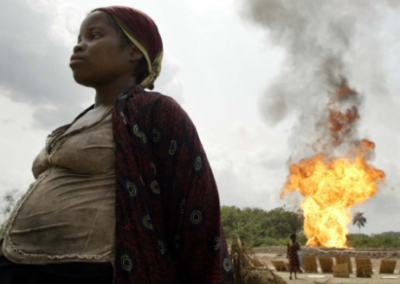 The region is well known for it’s massive oil deposits, which have been extracted for decades, with help of multinational oil companies, by the Nigerian government. Despite this, the majority of the Niger Delta’s population lives in poverty. The United Nations Development Programme (UNDP) describes the region as suffering from “administrative neglect, crumbling social infrastructure and services, high unemployment, social deprivation, abject poverty, filth and squalor, and endemic conflict.

The majority of the people of the Niger Delta do not have adequate access to clean water or health-care. Their poverty, and its contrast with the wealth generated by oil, has become one of the world’s starkest and most disturbing examples of the “resource curse”. Under Nigerian law, local communities have no legal rights to oil and gas reserves in their territory.

The Federal Government allocates permits, licences and leases to survey, prospect for and extract oil to the oil companies, who are then automatically granted access to the land covered by their permit, lease or licence. The fact that the people of the Niger Delta have not benefited from oil wealth is only part of the story. Widespread and unchecked human rights violations related to the oil industry have pushed many people deeper into poverty and deprivation, fuelled conflict and led to a pervasive sense of powerlessness and frustration. The multi-dimensional crisis is driven by the actions of the security forces and militant groups, extensive pollution of land and water, corruption, corporate failures and bad practice and serious government neglect.

The Niger Delta Knowledge Centre promotes reading and lifelong learning in the Niger Delta by providing students, teachers and researchers with a knowledge-hub; a hub that.. continue reading